When I started 13 years ago, it was Ashtanga Yoga that drew me to practise. Over the years, I have explored different styles of hatha yoga (ie physical yoga practice), such as Iyengar, Lara Bauman's Quantum Yoga, Ed Clarke's Tripsichore Yoga as well as other dynamic sun power based yoga.  In the end, I found that Ashtanga is my one and only true practice, and have followed that path for the last 6 years.  I have had the good fortune to learn from a number of fabulous teachers such as Kino McGregor, Matt Ryan, Scott Johnson and Hubert de Touris, who have all made lasting impact on my yoga practice both on and off the mat.

Ashtanga Yoga was introduced to the modern world by the late Sri K Patthabi Jois (1915-2009).  This ancient system of Yoga was originally taught by Vamana Rishi in the Yoga Korunta. This text was then imparted to Sri T. Krishnamacharya in the early 1900’s by his Guru Rama Mohan Brahmachari, and was later passed down to Pattabhi Jois during the duration of his studies with Krishnamacharya, beginning in 1927.

Ashtanga Yoga consists of 6 series of progressive sequences, the first being the Primary Series. A main feature of Ashtanga Yoga is that the postures in each series are linked together using the breath (Ujayyi breath).

Ashtanga Yoga can be practised by anyone, young, old, healthy and sick.  Each student is considered as individual and taught at a pace that is suitable to his/her situation in life.  Once you have learned the basic sequence, you’ll be able to practice Ashtanga Yoga anytime, anywhere.

The chief aim of Ashtanga Yoga is for the practitioner to create an internal heat (agni) which purifies and detoxes the body. This internal heat, combined with the intense focus that is required for this dynamic practice, ultimately draws us closer to our intuitive and soulful nature, developing an inner calm with increased flexibility, stamina and strength.

According to the yoga shastra, “Superconsciousness” dwells in our heart in the form of light, but this light is covered by six poisons: kama, krodha, moha, lobha, mastarya and mada (desire, anger, delusion, greed, envy and sloth).  When Ashtanga yoga is practiced diligently with dedication over a long period of time, the internal heat generated from it burns away these poisons, and the light of our inner nature shines forth.

This is the essence of Ashtanga Yoga as taught by the late Sri K Patthabi Jois. 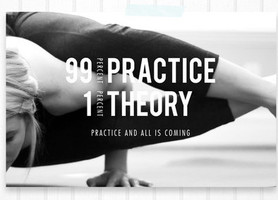 Evolve with Yo Yoga is having a little Christmas and New Year break until 15 January 2017. Between now and then, we will offer only one evening class a week on Tuesday 6.15 - 7.30pm subject to minimum 6 people booking.
Please make sure you pm, text, email or book via the website! Have a wonderful christmas and let's welcome 2017 with lots of love, positive energies and fun!!!

Absolutely amazing day! Generosity beyond we had ever imagined! We asked for 100 boxes. We received 170 boxes!!!!! Wow, wow, and more wows....

The extra boxes allowed us to touch the lives of even more workers than we had planned. They went to a nearby much smaller workers camp, to the workers of Qatar Animal Welfare Society, 2nd Chance Rescues and PAWS Rescue Qatar, as well as the reception staff, bell boys and cleaners of Tower 30 Porto Arabia who did so much shifting and moving for us over the past couple of weeks.
We thank you all from the bottom of our hearts. Those who donated, those who spread the words, those who collected, stored, drove, took photos, translated and delivered! It says so much about the spirit of the Doha Community.
Stephanie Korsage and I are truly overwhelmed by your support , and no words can really express our gratitude. It was truly a wonderful day to end the year with xoxo

Evolve with Yo Yoga is now a proud sponsor of Evenstar Charitable Association, whose aim is to make a little difference to those who are less fortunate, those who haven't a voice and those who are vulnerable.

Yo Yoga has always donated all of its proceeds towards charitable causes.  Now, being the sponsor of Evenstar, ALL our proceeds will be donated towards supporting their causes.

Evenstar is a charity registered and regulated by the UK Charity Commission, and as such there will be even more transparency and accountability as to how our proceeds are being applied.  Evenstar share the ethos of Yo Yoga, in that it is driven entirely by volunteers.  There is no staff costs and minimal overheads so almost every penny or cent goes towards helping others.  I hope that this will help attract more donations to help them help more people and animals in need.

In addition to donating all our proceeds to their causes, Yo Yoga is also one of their Participating Yoga Studios.  This means that for every £100 ( or equivalent ) of donation received, Evenstar will say a little thank you by giving you a free voucher to a yoga class in one of the Participating Studios worldwide.  UK taxpayer will also be able to claim Gift Aid.  Please visit their website to find out more.

Thank you for your support of us, which is instrumental in our strife to make a difference to the lives of many people and animals!